The cart is empty

Nose Mask and other Tools 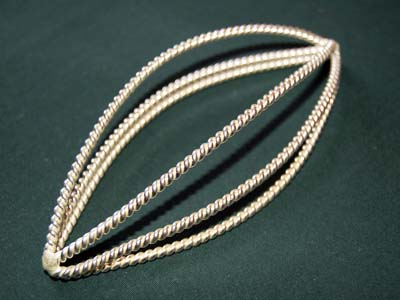 The Nose Mask is designed to reduce breathing difficulties by ionizing the air that the wearer breathes in. Breathing through the mask can be compared to breathing in cool ocean air. Eye / Head / Horse Masks were inspired by the success of the Nose Mask.

What would appear to be monatomic copper is apparently produced by the superconducting ring construction of the Nose Mask. This is a likely explanation for the reduction of bacteria, virus and fungal infections. The Nose Mask is used to alleviate sinus problems, asthma, allergies, hay fever, or any type of respiratory ailment. In addition, head cold symptoms seem to disappear soon after using the Nose Mask. The Nose Mask comes in two sizes, one for adults and one for children, and can be worn for any length of time, or for as long as it takes to experience relief.

The Light-Life® Eye Mask was inspired by the success of the Nose Mask. and is made out of copper wire, silver plated, with an adjustable elastic strap. It was designed to help improve eye sight. Early reports tell "when wearing the eye mask it feels like the optic nerve and the eyes relaxes quickly and therefore preventing possible headache." We also received reports showing amazing results alleviating migraines within minutes after putting on the eye mask. Please share your experiences with us.

The Light-Life® Acupressure Tool, gold plated is 6" (15 cm) in length and made from copper, gold plated. The energy flows in both directions in the tool. It balances the acupressure points. The loop seems to concentrate life force energy, use for 2-5 seconds on skin. The ball seems to create the flow/reactivation of life force energy. According to Slim Spurling's best estimate, by placing the Acupressure Tool on the acupressure points, the proper frequencies are re-introduced to the system, amplified by the tool, thus re-establishing the proper frequencies and deleting incorrect ones.

How and What the Nose Mask is

The Nose Mask was made after a friend of mine had a dream (God gives him dreams and he thinks very little of them) that I was going around telling people to wear this mask. At the same time Armageddon or the apocalypse was coming. In his dream every one that was wearing the mask survived the war and the ones that had the mask on at one point when they closed their eyes and opened them found that they were floating in the air. Then an angel appeared to him and told him to read the book of Nehemiah in the Bible (this book deals with the rebuilding of Jerusalem) and was told that the survivors would rebuild the cities. My friend thought I would find this dream funny, but having seen some of his other dreams come true, I took it to heart.

I had not made a Mask yet or heard of any like was in the dream. As I sat at one of the work tables in Slims house, looking for that inter guidance, my attention focused on a E.H. (Environmental Harmonizer) and I plainly saw a type of mask that could be made by removing two of the legs of a Harmonizer. So I headed out to the shop to make a prototype out of some scrap material. After it was cleaned up and was still wet I put it up to my nose and breathed in and out a few times, noticed that it smelled like fresh air. Telling Slim about it, he tried it for himself, experiencing the same thing. Then he had me make some more prototypes for field-testing.

A few days later Slim had some visitors and we offered to let them try the Nose Mask to see if they would notice any difference in the air that was breathed in. They did and noticed a clearing of the nasal passages, also they put some gold silk over the mask, in doing so found out that the air did not turn hot and still smelled fresh. The lady was so impressed that she wanted one for her mother, who had problems breathing, so we gave her one for a test run for mom. When she arrived home there was a message that her mom was in the hospital with pneumonia and flue like symptoms. She rushed to the hospital to see her mom, taking the Nose Mask with her.

Arriving at the hospital her mom's nose was red and swollen, she put the mask on and her mom kept it on all night. The next day the redness around her nose was gone except for one dot and felt so good that she checked out of the hospital with the desire to go home and start gardening. But did not have her strength yet and had to take it slowly till her strength was built back up. She also said "I was a child the last time I breathed this deep. " She let some of her friends on oxygen try the Nose Mask, they were disappointed they could not keep it, because of the relief it brought them.

The Nose Mask has helped some people with Hay fever type allergies, my Mom and sister and a friend in California who had asthma on top of hay fever. I have used the Mask when recovering from the effects of chemical spraying. Breathing through the Mask I noticed that the Cilia in the lungs was excited and moved the mucus out very rapidly with out having to cough a lot and when I did cough it was very productive, pulling mucus from the deepest parts of my lungs.

I've come to find out there is a fungus, bacteria and a mould that is resistive to antibiotics (coming from the chemtrails). It has been found that copper ions coming off the mask kills all three. The fungus, bacteria and mould infect the lungs and mucous glands causing protein chains to grow in the mucous sticking to the walls of the lungs, with sugar part of the food it uses to grow rapidly. This is not a cure but a remedy and possibly a preventive measure when the chemtrails are being sprayed.

This is how I think it works; The Nose Mask is constructed in such a manner that it has super conducting current but no amps or voltage. When a slight voltage is added to the Mask, the voltage is amplified forty times. So when it comes in contact with the skin the slight voltage from the body powers up the mask with a sizeable super conducting energy that is not harmful to the body but helpful. This energy might aid in producing ionized oxygen. It is already known that when copper is exposed to water it will oxidize, the moisture comes from your breath when it comes in contact with the copper. As you breathe in, the ionized oxygen is ripped off the copper pulling a copper ion with it.

What gave me evidence of the ionized oxygen happening is, when some friends that I gave Nose Masks to had their teenage son try the mask. He had been playing football out side with some of his friends, he was breathing heavy from the work out when he put the Nose Mask on and breathed in five times and became light headed from getting to much oxygen too fast, almost passing out.

When the Nose Mask becomes tarnished use ketchup, coat it and let it set for one hour then rinse off and it will be clean and ready to use again.

Masks and Other Tools